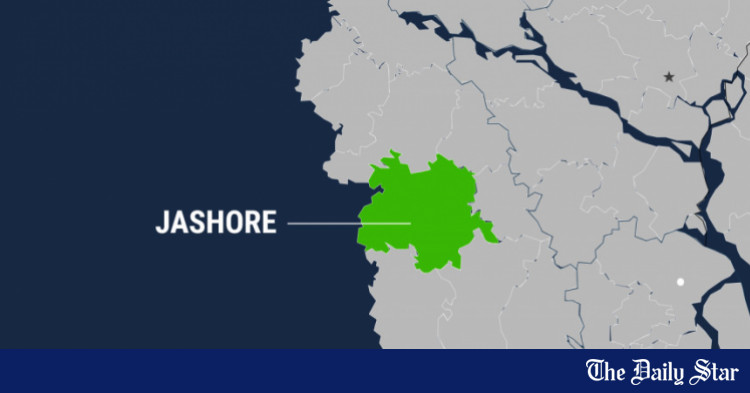 A suspected gold smuggler was killed in a clash with police in Sharsha area of Jashore early today, police claimed.

The arrestees are — Robin Sarkar (32) and Abul Kashem (34) — both hailing from Cumilla.

ASP Jewel said a team of detectives and Sharsha police jointly setup a checkpoint in front of Oriental Oil Company Limited on Jashore-Satkhira highway in Jamtala area around 11:30pm after receiving a tip-off that gold may be smuggled to India.

Around 1:00am, police stopped a white private car.

During the search, police found a total of 30 gold bars strapped to Robin’s body and the engine of the private car. The gold bars weighed 9.75kg worth Tk 7.5 crore.

Robin and Kashem were arrested from the scene, he said.

“Later, while interrogating the arrestees about the gold bars, all of a sudden, a group of men on around 30 motorcycles came from both sides of the highway to snatch the detainees and the gold bars. They exploded four-five crude bombs at the police. When the police fired rubber bullets in self-defence, they ran away,” the ASP claimed.

Some 200m from the scene, a man was found lying under a motorcycle with serious injuries. He was taken to Sharsha Upazila Health Complex where the doctor on duty declared him dead, he added.

His body has been kept at Jashore General Hospital morgue for autopsy, the police official said claiming that the deceased had no bullet injuries.

The filing of a case was underway in this connection, the ASP added.

Here are the most expensive NYPD lawsuits from this year

The latest protests in Baghdad come as Iraq has been mired in political paralysis since elections in October last year that have failed to bring in a new president, prime minister or government.

Thousands of people, brandishing portraits of the “martyrs” killed in the wave of rallies three years ago, gathered in Baghdad’s iconic Tahrir Square, the epicentre of the protest movement, an AFP correspondent said.

“All the bridges and roads are blocked because the authorities are afraid of the protesters,” he added, condemning “infighting within the political class, which completely ignores the will of the people”.

The demonstrations seek to revive the unprecedented protests of October 2019 that condemned rampant unemployment and the country’s decaying infrastructure.

Those protests raged for months before winding down under the shadow of coronavirus restrictions and a harsh crackdown that saw at least 600 demonstrators killed and tens of thousands more wounded.

The protesters on Saturday gathered at Al-Jumhuriya Bridge, where they attempted to overcome a series of barriers set up by security forces to block access to the fortified Green Zone that houses government buildings and diplomatic missions.

Protesters threw the iron barriers into the river, according to an interior ministry official who reported 18 minor injuries among riot police resulting from stones and glass bottles being thrown at them.

Police retaliated by throwing smoke grenades at the crowd to disperse them, the AFP correspondent said.

At least 28 protesters suffered from breathing difficulties as a result, according to an interior ministry official.

Rival Shiite factions in parliament have for months vied for power and the right to select a new prime minister and government.

The impasse pits the powerful cleric Moqtada Sadr against his rivals the Iran-backed Coordination Framework, which includes lawmakers from the party of his longtime foe, ex-prime minister Nuri al-Maliki.

Sadr wants snap elections and the dissolution of parliament but the Coordination Framework wants a new head of government appointed before any new polls are held.

Tensions boiled over into clashes on August 29 between the Sadrists, rival Iran-backed factions and the army in which more than 30 Sadr supporters were killed, after their leader said he was quitting politics.

A software engineer and his associate, who were accused by the Bengaluru traffic police of allegedly hitting a policeman and booked for drunken driving in the city in April 2017, were let off by the Karnataka high court as the police failed to follow the prescribed norms for registering drunken driving cases and collecting fines. The court order came on September 6.

The duo was let off after the court found that the police had collected a traffic fine for drunken driving on the spot and had not recorded the whole incident on video, which is in contravention of a 2015 circular of the police department. (File)

Techie Priyamshu Kumar and Alok Kumar, both residents of Bihar, were booked for preventing a public servant from discharging his duty and a case was registered by the Mahadevapura police in the Whitefield region of Bengaluru.

On the night of April 9, 2017, Alok Kumar, who was on a motorcycle, was stopped by the police for a breath analyser test. According to the police, the youth did not cooperate and did not want to go to the police station but instead called his friend Priyamshu Kumar, a software engineer, who allegedly slapped a policeman. (Read more)

Latvia’s Corruption Prevention and Combating Bureau (KNAB) has commenced 83 examinations of possible political promotion violations, as confirmed by the bureau.

On Saturday, 14th Saeima elections, no political promotion is allowed in Latvia. Prohibition to distribute political materials came to force on Friday, 30 September.

This means no political promotion is allowed in the press, around the environment or electronic mass media.

It is also prohibited to publish paid promotion on social media and other internet websites.

KNAB suggests printed press that come out every week should pay special attention to this prohibition. If magazines and newspapers publish political advertisements, they are not allowed to be released on Election Day and the day prior.

In Brazil, a grieving mother takes police killings to court