At the beginning of 2018, the country had lost over Ksh13 billion to corruption, with the National Youth Service (NYS) featuring prominently after it was hit by a Ksh467 million scam.

Amid the uncertain times, President Uhuru Kenyatta picked Matilda Sakwa to clean up the mess and restore dignity to the service. She succeeded Richard Ndubai, former NYS Deputy General who was let go due to corruption allegations.

A no-nonsense police officer, with over three decades of experience, instantly made history by becoming the first female NYS service commander.

“(Before I was appointed)I used to watch the NYS scandals and wonder what is happening at the service, thinking that they were mad. Little did I know that I would be picked to run the affairs of the service,” she told NTV.

At first, Sakwa declined the offer, thinking that she would be the scapegoat for a looming graft scandal. She, however, decided to take the job as a challenge and restore its pride.

“What I thought was I did not want to be arrested, but they insisted that they would send the three names to President Uhuru Kenyatta who would ultimately choose the person fit for the task,” she stated.

“When I was been sworn in, Uhuru noted that despite him appointing Deputy IG, I was the first female service commander and I assured him that I would not let this country down,” she added.

Left with a daunting task to tame further corruption, Sakwa fought the perception that NYS is still a cash cow where individuals supplied air and walked away  with millions.

“People still believe that NYS has a lot of money. Every day when I come to work, there will be three to five people coming to me, wanting to either tender or procure something and I affirm to them that the service lacks money and if there is money, we have plans.”

“NYS had a budget of Ksh25 billion but when I came in, it was reduced to Ksh8 billion. There is also a backlog of pending bills brought about by the NYS II scandal. Any organisation that can fail is because of procurement issues ie KEMSA, hence I need to stick to the law and do the right thing.”

Reminiscing about her decision to join the service, she had to ditch her longtime pursuit of the law profession- a decision that she doesn’t regret. She currently holds a Masters in Development Studies from the Institute of Social Studies and an undergraduate degree in sociology and religious studies from the University of Nairobi (UoN).

“I had plans to do law and become a lawyer, but what changed is when my father came in with a lady who was in full police attire and it piqued my interest.”

She noted that her ranking has inspired women into other positions of leadership, a fact that she holds dear to her heart.

“I want them to believe in themselves and to also ensure that by the time I am leaving work, structures are there and people do what they ought to do. Therefore, if you’re passionate about what you do, things will never go wrong.”

“There are so many women looking up to me to ensure that I succeed. If I was to fail, they will not say another one, they will say women cannot lead hence the few who are in the powerful position ought to be cautious all the time and do your best at all times.”

Her notable achievement was when she was ranked among the top CEOs in Africa due to her exemplary work in NYS in 2021. 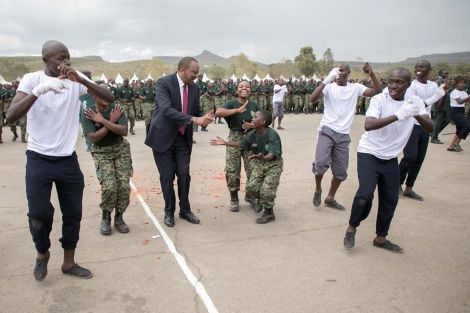 President Uhuru Kenyatta at the passing out parade for NYS recruits in Gilgil on February 16, 2018. Gurugram: Police have booked a revenue department clerk working in Badshahpur tehsil under sections 7 and 13 of the Prevention of Corruption Act for allegedly accepting money for registering an illegal property deed

Gurugram: Police have booked a revenue department clerk working in Badshahpur tehsil under sections 7 and 13 of the Prevention of Corruption Act for allegedly accepting money for registering an illegal property deed. The action was taken after a video went viral in 2021 where the accused official was seen accepting money.

A subsequent enquiry ordered by the deputy commissioner, Gururgam, based on a complaint lodged by a city-based RTI activist, found illegalities committed by the said official, and recommended action based on the finding. Police said a case was registered against the accused official at Badshahpur police station.

Ramesh Yadav, the complainant, said that he received videos showing the accused accepting money in October 2021. “I submitted a complaint to the office of deputy commissioner seeking enquiry and action for these violations. An enquiry was carried out by the sub-divisional magistrate and submitted to the deputy commissioner in January 2022, following which the matter remained pending,” he said.

Yadav said that he made regular visits to the DC office since then and asked officials to take action after which a letter was written by the district administration to file an FIR in this matter. “This letter also did not reach the police and I filed a complaint with Shivaji Nagar police station regarding the missing letter. Finally, the issue was brought to the notice of senior district administration officials and a case was registered against the accused clerk,” he said.

The issue of illegal registries has been a major concern across the state and in the city. The Haryana government ordered an enquiry into this matter in March this year. A number of revenue officials have faced penal action for carrying out illegal registries. The Inspector General of Police (IGP) has reiterated that the police administration will continue to reject the tag that it is the most corrupt institution in the country based on research and surveys done by various groups.

Speaking at a public lecture at KNUST, Dr. George Akuffo Dampare stated that research that points to the police as being the most corrupt institution in the country has challenged methodologies.

He said his outfit is working to ensure the police works to prevent corruption in the police service as part of its transformation agenda.

“We decided to access ourselves from your perspectives. We have been tagged as unprofessional, corrupt and what have you. We are not denying that we may have some recalcitrant officers amongst us, we are doing all we can to pluck them out. But we will never accept that we are the most corrupt institution.”

“It is unfortunate, all those researches are questionable. They have challenges,” he added.

Separate survey reports released by the Ghana Statistical Service and its partners, as well as Afrobarometer report, had officials of the service topping the corruption list.

According to the Afrobarometer study undertaken by the Ghana Centre for Democratic Development (CDD-Ghana), 65 percent of Ghanaians believe most police are corrupt, while 31 percent believe only some police are corrupt. An Introduction to Human Rights Advocacy