A PRISON governor has been bailed by police over bribery and drugs allegations at Wormwood Scrubs, we can reveal.

The man, who cannot be named for legal reasons, has been suspended pending a police investigation.

Bosses at the Category B West London men’s prison — widely known as The Scrubs — called police when the claims emerged.

Officers from Scotland Yard’s anti-corruption unit arrested the man on suspicion of misconduct in a public office and drugs offences.

He is a governor — not the one in overall charge — at the 1,279-capacity Victorian nick whose former lags have included serial killer Ian Brady.

A source said: “Prison bosses acted swiftly when the allegations came to light.

“They relate to his conduct with inmates involving bribery and drugs. It’s a very serious situation.”

Prison staff were notified by email of his suspension. An officer at another jail was also suspended.

The Met said it investigated in tandem with Her Majesty’s Prison and Probation Service’s counter-corruption unit.

A spokesman said: “As a result,  a manager within Her Majesty’s Prison and Probation Service was arrested on 14 December on suspicion of misconduct in a public office and drugs offences.

“The man has been interviewed and released under investigation pending further enquiries.”

A Ministry of Justice spokesman added: “Two members of staff have been suspended. It would be inappropriate to comment further while police investigate.” 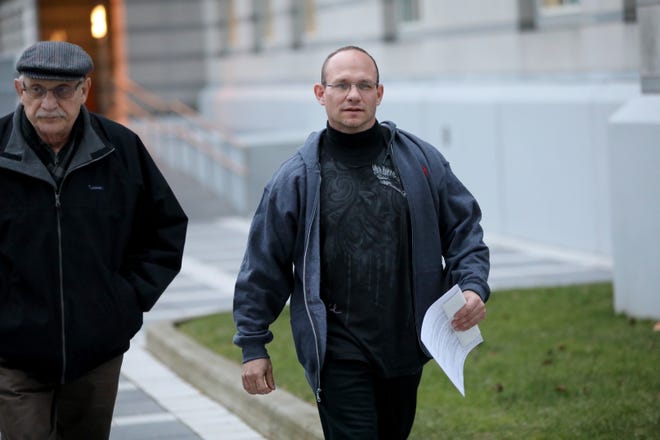 NEWARK — Punctuating one of the worst police scandals in Paterson history, a federal jury on Thursday found Sgt. Michael Cheff guilty of civil rights crimes, making him the sixth member of the self-proclaimed “robbery squad” of cops to be convicted.

The verdict followed five days of testimony in which Cheff’s five co-conspirators admitted to robbing, beating and abusing people they illegally stopped and searched in Paterson – and later joking about their crimes in text messages that became key evidence for the government.

Federal prosecutors repeatedly told the jury in the trial that Cheff was the pivotal man in the scheme, the “inside guy” who allowed the rogue cops to prey upon Paterson residents. Cheff, who joined the Paterson force in 1996, helped them cover up their crimes with bogus police reports and sometimes took a share of the cash they stole, according to prosecutors.

The jury didn’t buy assertions by Cheff’s lawyer that the sergeant was simply “an easy-going” boss who was taken advantage of by the five criminals he supervised – Jonathan Bustios, Daniel Pent, Eudy Ramos, Frank Toledo and Matthew Torres.

Cheff’s conviction represents the final victory for the FBI and U.S. Attorney’s Office in a probe in which eight city cops were convicted over the course of four years, the officers falling like dominoes as they lined up to testify against each other.

The five fired cops who testified against Cheff had signed cooperation agreements that promised federal prosecutors would submit letters to the judge recommending they get a break on their jail time.

More:‘Everything we do is illegal:’ Crooked ex-Paterson cops joked about their crimes

What impact their testimony and those agreements will have on their prison terms remains to be seen. Though the men pleaded guilty to their crimes more than two years ago, federal authorities have delayed their sentencing until after the Cheff case.

The FBI probe also snared a Paterson officer, Ruben McAusland, who had been regularly selling drugs from his patrol vehicle while on duty and in uniform in 2017 and 2018.  When federal agents arrested McCausland they found on his phone a video of him brutally assaulting a suicide patient in a hospital emergency room, resulting in a separate case in which he and his police partner, Roger Then, were convicted.

Federal authorities previously had said Cheff faced a maximum penalty of 20 years in prison for the false records charge and 10 years for the civil rights conspiracy.

One of the accused was nabbed later in the day by the bureau.

Interestingly, one of the junior engineer booked on Thursday, had made headlines earlier this month as well after police had nabbed five people who they claimed were planning to commit a robbery at the Banur residence of the engineer.

As per officials, those booked by the vigilance bureau were identified as former Sarpanch of Kotla Suleiman village, Tarlochan Singh, former panchs, Ranjodh Singh, and Pavitter Singh (who was arrested), and junior engineers, Lokesh Thaman and Lalit Goyal.

According to the FIR, a resident of Kotla Suleiman village had lodged a complaint with the bureau stating that the accused had bungled funds approximately to the tune of Rs 20.67 lakh, which were meant for the development of the village.

The Aam Aadmi Party (AAP) on Thursday slammed the ruling BJP in Haryana for not taking any tangible action on the first information report (FIR) registered under the Prevention of Corruption Act at Gurugram’s Kherki Daula police station against former chief minister Bhupinder Singh Hooda and businessman Robert Vadra regarding suspected irregularities in a land deal.

Reacting to a Hindustan Times report on how investigation in the case is crawling at a snail’s pace even after nearly four years, AAP Haryana in-charge and Rajya Sabha MP Sushil Gupta said BJP used the land deal to highlight corruption and nepotism of the Congress government in the run up to the 2014 Parliament and assembly polls.

“Having won the elections on the anti-corruption plank, the ruling party is now reluctant to take any action against Hooda. This shows that both the BJP and the Congress are birds of a feather,” Gupta said.

“There is rampant corruption in every municipal corporation. The scam in the Faridabad municipal corporation is just the tip of the iceberg. No action is being taken against the bigwigs involved in the scams. Only junior level officials are being arrested,” Gupta alleged.

The AAP leader said a Whatsapp chat from the mobile device of former Haryana Public Service Commission (HPSC) deputy secretary Anil Nagar, who was arrested by the vigilance bureau in a corruption case, was read out aloud in the assembly. But no action has been taken on it, he said.

From the Vault: What happened to Jimmy Hoffa? 1993 WDIV special explores

How ‘gate’ became the syllable of scandal

If Peter Dutton has a soft side, now is the time to show it